Snickers introduced himself to Shasta at Stewart Ranch (now Walters Ranch) on Hihn Road in Ben Lomond. In November 2008, Shasta was boarded at the ranch for training, and the two boys met each other over the fence.

Whenever Snickers was turned out in the round pen, he stopped over to sniff noses with Shasta. Shasta was allowed to be turned out with him, and they acted like they were long lost brothers. They played, kicked, and bucked, and they seemed like perfect companions. One day, Shea Stewart, told me about an opportunity to adopt Snickers because his owners did not want to continue to pay for boarding when their 18 year old daughter lost interest in caring for him. In the picture, he has mane loss and a sunken back.

On November 30, 2008, Snickers was brought to Love Creek Farm by Shea.

He arrived before Shasta so he could adjust to his new home with the goats, Zipper and Theodora. Snickers had no problem getting along with the goats. 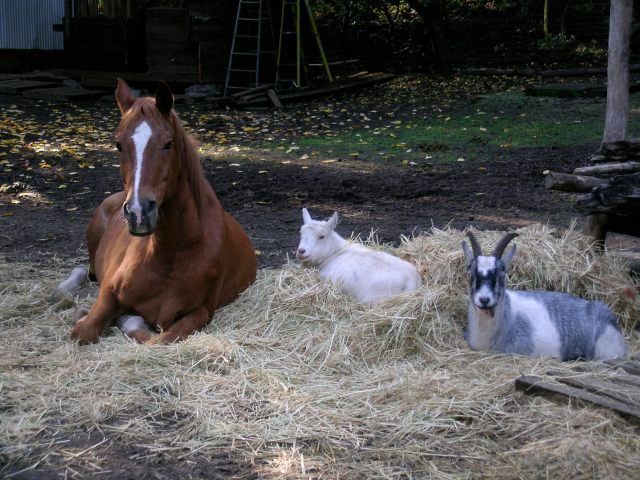 We adopted this mellow and friendly Arab for only $1.00. He is a purebred on the Arabian Horse Registry of America Inc. under the name Abu Hassan Dhadi, folded on 5/5/91. We enjoy giving Snickers a relaxing and stress free retirement home. He does have his own issues that required training in the past and occasionally in the present. He was formerly ridden in endurance, and we learned that his worry comes from an ill-fitted saddle. He will spook and run when his winter blanket is put on. It takes a few times before he realizes that he won’t get hurt.

By March 2009, Snicker’s coat is shiny, he has gained weight, and his mane is growing. He has been given CA Trace Minerals, flax seeds, alfalfa and beat pulp. He has many scars on his neck and chest from fly bites that turned his hair white.

Snickers was adopted as a companion for Shasta in order to help him calm down and learn how to be a “normal” horse. Snickers is so gentle and calm that he can be groomed and spoiled by people of all ages. 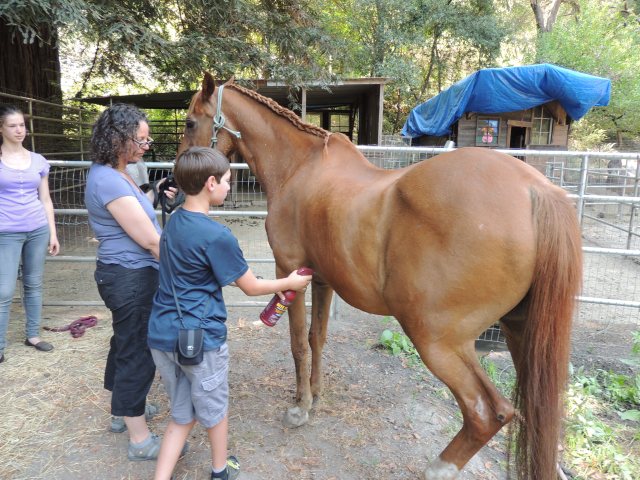 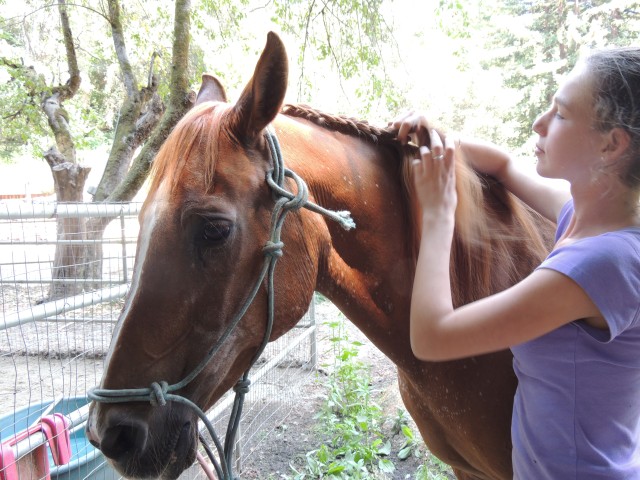 Snickers is a wonderful horse, and with him, children can experience grooming and basic groundwork on a lead rope.