On January 24, 2016, we adopted 13 chickens from the Santa Cruz County Animal Shelter.  A friend of mind mentioned that they periodically have white chickens for adoption, and when I checked their website, they had 9 rescued hens.  I immediately went to Mountain Feed and Farm in Ben Lomond to buy hay, shavings, and lay pellets.  After setting up the coop and hen house, I got to Santa Cruz by 3pm.

They had 9 white Leghorns rescued from a factory farm. It was stated on the website that they were 2 years and 3 months old. I was told that the factory farm gets rid of their hens when egg production slows down.  A non-profit organization, Animal Place, in Berkeley, CA saves the chickens from being gassed, and then distributes them to various animal shelters.  I was fortunate to be able to adopt 9 of these special hens.

In addition to the 9 Leghorns, there were also 4 Americanas up for adoption.  They were kept separate at the shelter.

Leghorns at the shelter

Americans at the shelter.

No questions asked, I adopted them all.  A nice volunteer helped catch them.

As soon as the chickens got to Love Creek Farm, they checked out their new coop and took a dust bath.  All 13 were integrated together, and they get along fine. They seem to be very happy, and we are preparing an outdoor area for them to eat grass, sunbath, and roam the hillside. 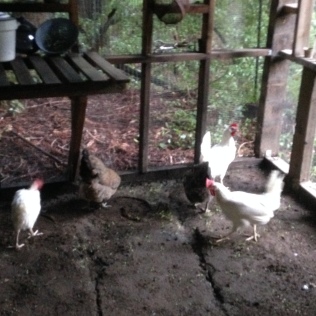 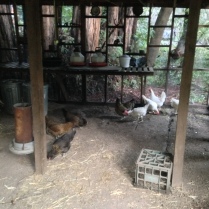