It’s exciting that the fencing around the Cathedral Redwood Grove is almost finished.  We started on the Redwood Bark Fence back in November 2018.  I’m happy that I finished another section today. 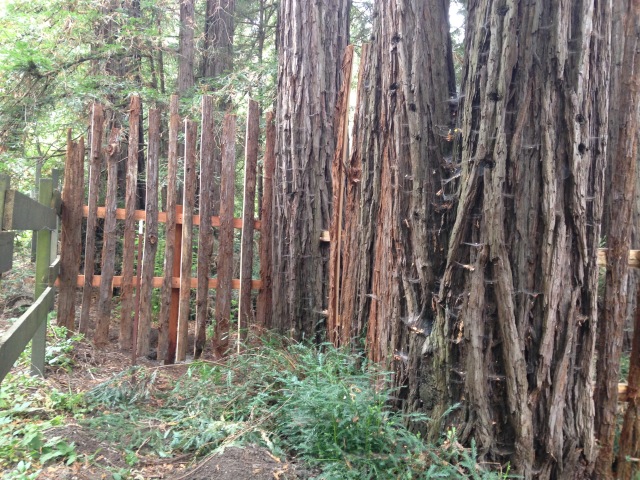 However, we are actually considering adding the slab bark all the way around which will take much longer.  For now, I’m pleased with our progress so the horses can play in the sand and nibble on the fresh sprouts…. very soon, once the iron gates are welded on this coming week.

I found these custom designed iron gates on craigslist for $150 and picked them on New Years Day, 2017.

We always knew they’d go in the redwood grove to highlight the entrance as something more fancy than wire supported with t-stakes.  To get the process started, I bought 10′ metal posts from PD Steel over the Christmas holiday, weld-on hinges, ball caps, and black primer.

We dug the 3′ holes in spring, but the holes would fill with water. It was difficult to dig because of the mud and not really being able to determine the bottom which would just fill back in with mud.  The redwood roots hold water.  In the summer, Will and I cemented in the first post.  We had dug the second hole, but Mike did not want to cement in the second post for fear that the measurements would be wrong.  Good thing!

On Friday, August 16, welder Jordan Booth came over to get a sense of the gate measurements and help us with the second post.  He had quickly eyed the gates back in 2017 when he was working on another project for us, and I thought he said leave a 2″ gap between each post and the center (so 6″ total).  Over the phone, he said, no leave a 1″ gap.  When he measured and saw the gates, he said that they were designed and built for a sloped driveway, that they are not even.  Oh, I remembered that when I went to get them in Los Gatos, the house was down a sloped driveway.  He said we had to move the 3′ post hole over to accommodate for some modifications he needs to make on the gates.  This is exactly why we knew not to cement in the second post.  There are too many things that could go wrong until the expert is present!

Farmhand Will Burke got busy digging out the second hole and cutting through big roots with a Sawsall.  In the meantime, Jordan filled the first post with cement to sturdy it and give structure for welding on the hinges. 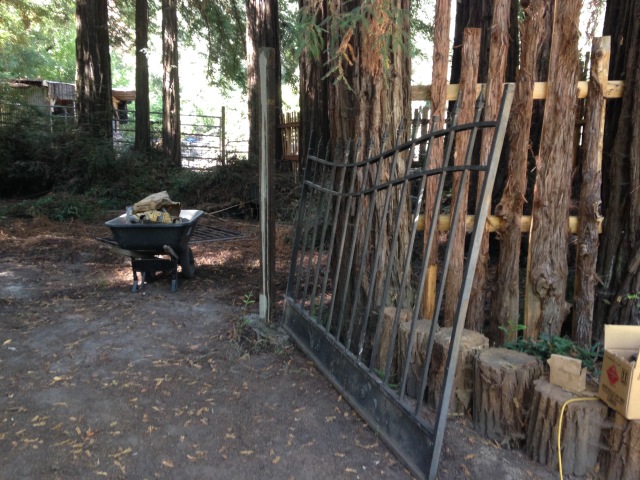 The guys mixed a lot of cement.   We also had to fill the wrong hole with cement and chunks of cement, rock, and bricks to give structure and support for the post.

Next steps are to grind off the rust and cement residue on the posts and weld on and reframe the iron gates.  Looking forward to seeing the gates on the redwood grove!!!

On Monday, August 19, Jordan returned to modify the gates for more structural support and weld them on.

He removed the original hinges with a grinder.

Then, he set up the gate, measured the gap and made extensions on either end to strengthen the area where the hinges would be attached.

Deciding how high to raise the gates and welding them on.

The gates really look nice on the redwood grove.

The location of the first post caused the gates to be off-center.  But, they had to be set back a few feet from the tree due to roots and burl.  Jordan commented that it would be perfect for a “pedestrian” gate.  He wanted to design a gate, and I was excited to have something custom made. 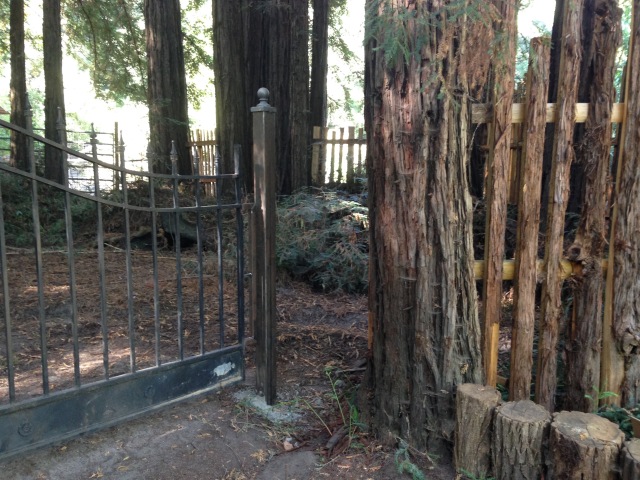 The gate was installed on Wednesday, August 21, really fast turn around time.  It looks great, perfect rustic style for the farm.  Jordan said it’ll rust up in about 6 months, and he even removed some of the black paint of the new, shiny latch so it would have the same patina. 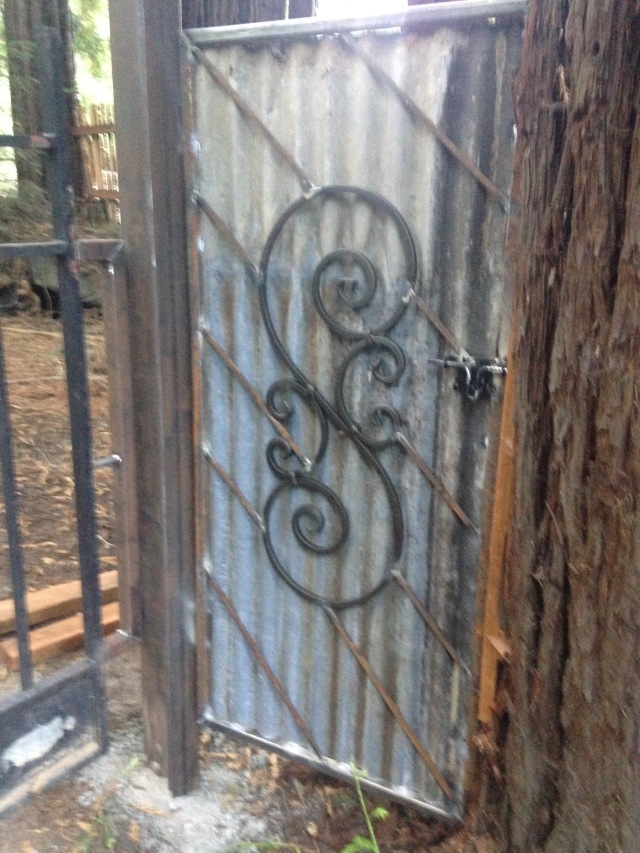 Jordan recommended cleaning the black gates with acetone, then brush off the peeling paint, clean again, and finally spray paint with black primer.

2.5 acre permaculture with heritage orchard, organic gardens, redwood forest, and riparian corridor along Love Creek at the base of Ben Lomond mountain, San Lorenzo Valley, Santa Cruz County.
View all posts by lovecreekfarm →
This entry was posted in About. Bookmark the permalink.
Loading Comments...
Comment
×
%d bloggers like this: